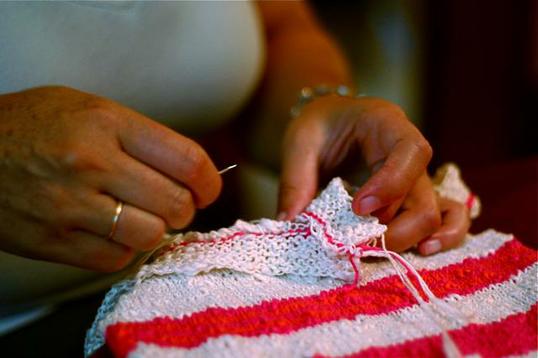 I had a favorite sweater I loved wearing. It wasn’t too bulky but was still warm and cozy. The only problem was the threads were loosely woven together. It would snag on things, so I had to be ever so careful when I wore it.

I was always mindful of the delicate nature of this sweater so I could protect it, make it last, and enjoy wearing it time and again.

Until one day I was in a hurry. I grabbed some things I needed for a meeting and rushed to my car. I tossed all my stuff over to the passenger seat, including a spiral notebook. A spiral notebook whose metal binding wire had gotten caught on my sleeve. As I pulled my arm toward the steering wheel, the notebook came with it and pulled a huge snag in my sweater.

I unhooked myself and assessed the damage. Based on what I saw, I should have taken the sweater off, put something else on, and later taken the time to repair the snag the correct way.

But in the rush of all I had going on, I made the tragic decision to do what seemed easiest in the moment. I snipped the lose threads and hoped for the best. That tragic decision started an unraveling process that ended the life of that beautiful sweater.

Recently, my husband and I got into an argument. In front of the kids. Over something so stupid. Right before we were about to head out the door to go on a date.

I wanted to go sit in a coffee shop by myself and make a mental list of all the reasons I was right. All the reasons he was wrong. And justify my perspective. But it’s at this exact moment of resistance that an unraveling can begin.

Doing what seems easy in the moment often isn’t what’s best for the long term.

I pushed for us to still go on our date. It wasn’t fun. It wasn’t easy. There were tears. There were awkward stretches of silence. But we pushed through the resistance we both felt, and eventually talked.

Talking through the snags. The pulls. The things that threaten to unravel us.

The unraveling can happen so quickly.

What’s something you can do today to invest wisely in your marriage? To be mindful of your mate? To protect your relationship?

For me? I had to apologize. The right way. By admitting I was wrong and asking for forgiveness. Repairing the snags the right way… tying a knot and tucking it back into the weave of our relationship fabric.

Isn’t it funny that when we get married it’s called “tying the knot”? For us, this wasn’t just an act at the altar. It’s something we have to do over and over again.